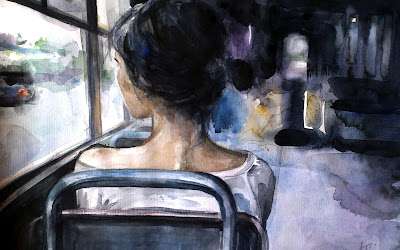 Running into his arms,
As I held him tightly,
Only to the most unlikely,
Found the ship to have changed it’s course slightly..
Slept like a kid all through the night,
Right on his shoulder,
Wishing when my eyes open to grow older,
As fate had defied to get bolder..
Our fingers spoke the same tone,
Trickling laughs to my very bone,
Surprisingly I was left alone,
As he chose the route to be gone..
Neither of our eyes lie nor did they ever asked why,
Perhaps they had lost hopes to try,
I pleaded them not to cry,
While he wiped those drops dry,
Giving out a little sigh..
Walking down the meadow,
As I followed his faint shadow,
Taking my hands closer to his heart,
Whispered..
“A reflection of my soul,
You ended up playing an unforgettable role”..
Email Post
Labels: E-greetings Friendship innocence Kids and Teens Literature love