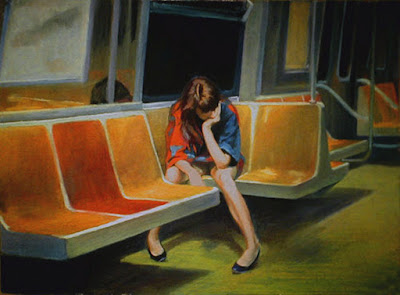 A usual weekday tired of the heat and hard work at the hospital.The hot day had made me weary already as I was tempted to sit down and doze off every few minutes before my shift's end until some one feels the urge to wake me up from my deep slumber.But that couldn't happen as I was tending back to back patients needing immediate assistance.
Finally returning from my shift caught the last train  but my place wasn’t coming up sooner until it stops at approximately 20 stations in between.Grabbed a cozy corner where I could execute my earlier plan with minimum botheration.
“Did I wake you up ?”..said a familiar voice which I was not hoping to hear ever again in my lifetime.
A familiar instinct poked me that this is got to be some dream where I am traveling different worlds as the person who was asking me the question was  hidden in a chamber inside the casket full of memories which had made all attempts to get faded a long time back.
“How are you ?” as he smiled with those magical eyes , his  face had started  to get blurry through my watery vision.I was fumbling failing to make sense at the same time while my feet kept shaking with trembling shoes making me trip everywhere as I tried to get a stronger grip of me so that I can forcibly get a chance to wake up pulling myself back to reality.
Right when those hands had pulled me tightly so I slowly stopped fighting myself.

Giving up finally by resting my heavy head down deeper listening to his heart beats.Closed my eyes calming down the rage inside, wondering if this moment had any possibility to exist in real.

“I missed you !”,  I exclaimed an instant sigh came along with my tone getting heavier as I spoke.

Couldn’t make out much from the other side either.
Moments of silence as the next stops got announced in order playing as a regular side track on my mind as I kept sleeping peacefully after decades of restlessness.
“ I should get going but it was a miracle to see you in person” , whispering those words into my ears moved my head from his lap where I was sleeping  with my mouth wide open.
Adjusted my head on my laptop bag tending my messy hair from my forehead , kissing  lightly on my cheeks.

Why didn't he make the slightest attempt to wake me up before leaving?
As I thought suddenly a jerk accompanied by a painful thud woke me up as I fell licking the cabin floor.Opened my eyes to the vicious truth grabbed my bag and walked out the door.
Tears rolled down making those eyes wet wiping off the kiss from those cheeks drying them back to senses as I had found myself exactly at the same spot when he walked away from my life leaving me all alone.
Rushing into the dark hallway  searching  for my room keys caught hold off his lighter in my bag  instead still very much there which I used to offer when he pulled out a cigarette and kept digging into his pockets miserably staring at me smiling sheepishly for me to help him out without saying a word.
The days where we started off with heated arguments and the moment his eyes fell on a tiny scratch in my finger, it would unknowingly make him hold my hands and keep comforting gently ignoring every word I said after.
God ! , where are my damn keys as a drop of blood trickled down with a pin piercing my finger.
"It doesn't matter anymore", speaking to the finger crazily took out my keys and went inside.
That should never happen again I kept grumbling with the mirror while brushing my teeth that night.
“Move On! - read it loud." 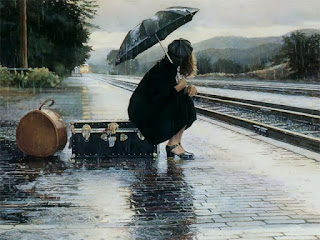 were the words my permanent marker had written on the whiteboard stuck to my refrigerator to which I glanced through taking the last gulp of juice.
I forced myself to read it as loud as possible crying out loud enough to help my heart recover from the earlier drench of the guilt trip which I have to get rid of sooner in order to move ahead ignoring the fact that the wound might have dried away after healing but the scar still remains alive  and prominent after 5 years from moaning his death.
Email Post
Labels: love Personal Stories Romance scar thoughts tragedy