How often have you had the urge to shout out loud  when you are sitting quietly among a crowd of people advised to be silent all the while with no movement what so ever.

How often have you had the urge to call someone who has repeatedly asked you not to..

How often have you had the urge to see someone when you very well know that person doesn't want to meet you or will never talk to you ever again..

How often have you had the urge to run away from a party where you are among the ones hosting the guests and in charge of making them feel comfortable..

How often have you had the urge to just start singing a song loud enough so that you ignore the  preacher who wants you to follow the miracles of life which seems practically impossible...

How often have you had the urge to jump into a waterfall knowing very well that you would die as you don't know swimming very well..

How often have you had the urge to just say sorry and make things better when you know it's never going to unwind as before..

How often have you had the urge to actually smile instead of crying when someone close to you just dies.. to cherish their memories as you think about the times you spent with them and how suddenly now it will become worthy of it's existence in your life as a painful mark...

I know these have nothing related to addiction but somehow they all relate to the urge to do something when you very well know you are not supposed to that particular thing or doing so you are not going to make much of a difference but you still can't control the urge of going ahead and doing it.


"Because Your Eyes Said

You Were Feeling It Too" 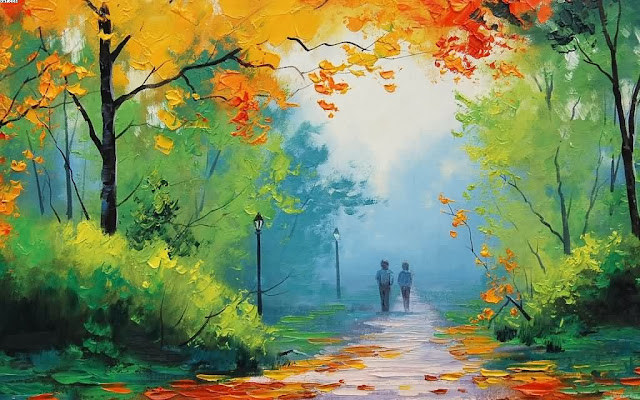 There are certain relationships you get addicted to and even if you want to it's not easy enough to break free no matter how many times your brains talk you out of it.

Have always been addicted to friendships since childhood over all relationships.Sometimes ended up fighting with family and loved ones due to friends.
While other times ended up alone as friends chose other priorities over friendship forcing me to read the obvious as they had completely moved on with me still waiting for them to come back to the very same spot they chose to quit.

As a kid was very shy on confronting someone and become friends effortlessly especially was fascinated by the word best friend which by now I think is just a fancy terminology with no actual intentions behind.

Since the beginning of time have been always been defined by a friend who has known to be closely associated with me.But as time went by started to realize more that it was my dependency not theirs which created these close associations.

Life has his own way of explaining things as we grow up.Sometimes it explains you in a detailed manner while most of the times they come in as a sudden jerk or a grave reality check.

For me there have been equal times of both experiences.There were times when my friend had chosen to go the other way because they wanted to refine their future and not to doom their ways with a notorious kid.This happened when I had just been shuffled away to a separate class from my closest circle of friends to help me get academically stronger as per the teachers way which resulted in one thing  that the bond was definitely not strong enough as it got pulled by its roots pretty quickly.

There were times when I was called in for choices which I clearly hated as I believed friends are there to die for and not to take a pick at or make your best selection cause they just happen around the clock with absolute zero manipulation.

Towards high school they became lesser but the ones who stuck around were not less than a strong addiction of hanging together in thicks and thins.For some they pretended I didn't exist anymore as they moved to better colleges and there were incidents of me going to meet them and they either not turning up or lying on my face which I thought was absurdly annoying.
Those were probably  the first times of being getting ignored so my heart was getting used to the ignoring phase which became quite popular afterwards.

At junior school being part of a popular girls group was a mandatory cult for a normal convent goer.But at that time being a shy person myself found it hard to please someone where all I wanted was to have fun or play in the limited recess time.I joined the junior kids instead who were pretty delighted to have me.Enjoyed their special treatment and funny innocence which gave me freedom to play without much thinking or gossiping around forcing someone to love me while getting admitted to their lives.

Things changed when I went off to college it all started with a lot of friends to a handful of friends followed by the day every single one of us parted to go in their own suitable direction.Not to mention things went way too complicated, life wasn't simple like the playtime anymore.It was when reality was kicking in every single second of our lives sometimes as a friend's broken heart, relationships based on lies, masked friends, fake world, money driving vultures,up and close with death of your dear one,annoying rules,peer pressure.

It becomes squishier while you keep experiencing good things and bad things in the form of regular packages.All the philosophy of righteousness , trust , love , devotion seems to be blurry as you keep encountering different tangents of the same right angle.


Alone as it comes to dwell in the real world ...We all are into it many times not knowing that there is no one except you who needs to hold onto pulling yourself hard enough to get out through this pit of quicksand which we all elaborately name as hardships.

But even in the darkest of moments there is light somewhere down the other side of the tunnel.So for me they gave me strength to pull over the gruesomest stunts fearlessly battling life's messiness with the filthiest jokes.


There  won't be a lot in one's life but the one you have should be worth walking down the darkest streets telling him/her your darkest secrets without fearing any aftermath.