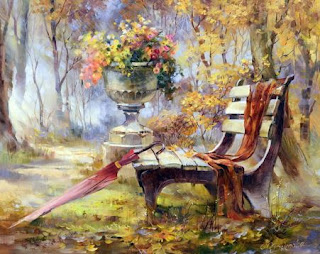 Next Time you come the other way around..
Let me find out a way that you can be found..
Don't listen to the noises around.
You stay where you ended up being..
You stay where you want to be..
You become the devil..
Or play good..
That's your part to be played.
Because either ways it made a difference the day it popped a thoughtful cloud.
In my mind that continues to play blind.

Have you ever put thoughts into the way our minds try to fill in the blanks when things don't go our intended way ? , or things just hit an abrupt dead end? . Well, while we are at it I would say that most of the times these analysis or rather assumptions isn't true.It's barely our escape hatch that we put together for our own discretion.

You meet this person one fine day and her smile is captivating , there I tried to use the most fascinating word that works for you (laughing out loud while I use this adjective promise no more usage of false notions or adjectives anymore in this piece) .So back to where I was , she greets you with a polite courtesy acknowledges the way you stare at her without loosing eye contact.

Now there you go thinking that she will make an out of the way attempt to meet you the next day ,and the following day until sparks will happen, whereas throughout the conversation the other way around was why did I even start to begin with? ... this just seems to go forever and what's wrong with my eyes ? why does he stare at me so long ? ..

So yes you guessed it right she doesn't show up the other day pointing a sharp pin at your false bubble of hope that got created and which did hurt you a bit but the blame is all on you.

Most of my childhood I recollect ,I was as ignorant as most of the us always are during that innocent phase willing to walk the extra mile to save someone off the hook or to create flowery roads so that someone can overcome prickly thorns the next time they take the same way.To hug anyone and everyone not trying to know the fact that they have sweat or meat on their shirt or they just deal with fishes all day long.I sometimes wonder why don't we interact like that any more when we grow up like a punch for leaving you out on the sun and hogging the last icy bar and a kiss for being the only helper while others bail out in your science experiment, a tight hug right after which you sleep for standing all night  long waiting for him to jump out of their window , a  nice long walk for watching you work getting greasy repairing your bicycle  while sipping on a warm lemonade that you could afford.

Well ,frankly that attitude will never survive when reality kicks in for then for some emotions boil up in reckless accidents and while trying to overcome mishaps, losses, the feelings just loose being at ease anymore.

By the time I hit my twenty's and was trying to live on my own all hell was let loose on me. I had been robbed, slapped ,humiliated, let go, shut down and not even existed for the people I had once been overboard for and that eventually made me pay lesser and lesser attention to friendship  and saying right away whatever I will do it.

By thirty only a handful or even lesser left for whom I am still very much a kid like back in those days.Because the other way around doesn't fail you every time.That's the gruesome truth of growing up not everyone will like you and you will be actually fine being the not likable around.

I will tell you what, the interpretations don't usually have to hit a match back.

So what for some you were annoying, poking,super interfering or even worse that person didn't get you at all while you kept thinking you had all squared out.Many a times people come your way just to hang around and have fun and the moment it's over they hop into the train for their next destination.There's nothing to overthink there so moving on is the easiest ladder to climb on which isn't fair but what if it's the best possible dare.

How I love to rhyme beware !

P.S. I am too bad in forgetting and letting go. I admit !

Now let's talk about life , just kidding that will anyways be an ongoing season in parallel to whatever happens or doesn't. The other way around do comes with a lot of surprises.

A usual day at work with a heated argument leaving on your way back home there is this elderly encounter conversing through eyes telling you to watch out where you off to in such a hurry asking you to sit back and slow down and enjoy a sip of your coffee while you wait down the curb as you keep missing those tender moments with your grandparents.
I personally do as I have none left in my life anymore.

You smash a football kick on a sunny afternoon impatiently waiting for your dad who bailed last minute on your practice day.A passer by just walks over and ends up giving you the lesson you always waited for.Teaches you the right moves, shares secrets of unknown legends as you keep thinking about having the same conversation with your dad some day.But the other way around did make a difference which doesn't get sold out of the fact that he was a total stranger that worked even better due to lesser expectations.

You end up loosing your job, and as you hopelessly walk down the streets , there's a known face following you whose calls you kept ignoring not letting him know about your dismay who cannot just see you loosing it all on a mere job.Takes you home serves you dinner and blurts out the best motivational speech to put you in that interview spot set up starting the very next day.

Now Love, has always been a sensitive subject but my opinion even though it will not make the least difference from what you have stored on your side.But I will still give it a shot.. it does happen,lives at the moment and for the people who don't realize it ,poof it's gone after that moment.It's independent of being tied along with forever and ever because that's what relationships and commitment are in for so don't misinterpret or get misinterpreted while you go for it.

P.S. All of this love , expressions are mostly for commercial reasons a total thought about marketing strategy which has made the bucks for years and still remains making tons.

Mothers love is always going to take the spotlight where actually the other way around can be hardly misinterpreted as they are crystal clear no matter who are they, where are they, unfair,left out doesn't matter they still count the most. That way I can say you will always have or you know just one or 2 personas who will be the same no matter what.Somehow the concerning part of love is when it's absurd, weird, childish, smothering, unnatural, superficial, annoying, harmful.There are a lot of philosophies around them but hear me out , it's okay to be stuck in that radar for too long but yes don't kill yourself for it. The moment you stop thinking it does cease to exist just give it a try.

Quick pointers as you misread interpretations for what if it was love ?:

Phew ! that was a pretty hefty explanation on my part , hope I was convincing enough.

Now anger,however is a straight forward honest outburst.There's silence, retaliation, violence, no patience and it ends in a vivid conclusion with no audiences who stick around by the end of the show.

But with a heavy exclamation there are exceptions round the corner who will actually try to ease through, read your mind , and calm their ways into you to make it disappear and that's when you realize the best part of being gentle.Not with criminals though.

And as I conclude I would emphasize that your first approach should always be doubt, because that's the world we all have created to live for ourselves so learn to face it.

I know interpretations will still be a crucial part of us , can't eliminate that fact but yes would say less of judging and misjudging everyone and anyone.Less of loitering around other's world, less of discussing the interpretations and lesser of getting all pretentious to cover your poop.(huh!, sorry had to use that) .

You are not them and they are not you so play your part until you get the best role played in this indefinite portal called life.