" Christmas Time " makes us all feel jolly good .
No matter how much we say that we are all grown ups now, we still feel the urge to get a gift or two from our very own favorite "Santa Claus" ..... 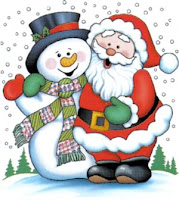 As a kid , i remember putting a small basket under my bed , and always dreamt of  Santa
flying slowly on his sledge and giving me my share of gifts , for being a nice kid throughout the year.Sometimes i would get and at other times i wouldn't .But the thought of Santa flying with the sledge carried by reindeer's, and elves along with fairies travelling all over throughout Christmas making the event phenomenal always ponders my mind till date.

I am still waiting to catch a glimpse of an Elf , Fairy or mighty Santa some day.....i know its all in our imagination .But sometimes these imaginations make us aware of some tiny little values which we tend to forget in our fast pace of life.Here's an innocent thought which just breezed in to my mind on ......
The Night Before Christmas...

A biting ,chilly breeze flowing with the advent of Christmas.Snow drizzling all over ,freezing night getting colder but  brightened by lighted decorations making it look like a carnival celebration ,  some where  a sledge with glittering reindeer's , dazzling Christmas trees , or lighted stars with shining pathways , colorful mistletoes ,wreaths and garlands hanging through the doors of houses making you feel the warmth of the festival.

"Pesto", a poor old  fellow just loves Christmas and every year goes to the church without fail.He knows that to the world he is just another old  beggar in town but for the Almighty , he is a common man  who believes in Him.
He wears his "Magical Cloak" , an old leather coat gifted by a young lady whom he met while she was rushing for the bus ,after a long day of Christmas shopping , unfortunately she missed the bus and started to curse "How unlucky  ??? Now i have to wait for an  hour to get the next  bus to reach home ".....as her eyes fell on Pesto , suddenly she realized she was wrong as he was wearing a  sweater which hardly fitted him and was  holding a piece of bread but was  still smiling at her as he had earned his bread and had so far a good day.She came up to him , and greeted him "It seems you are cold ???" ,at which Pesto exclaimed "Yes my child it is cold , but its Christmas after all "

She spoke to him for a while and the next day , the lady came up to Pesto " I know its Christmas so just got an old coat as a gift for you father as my father used to love his coat and he used to call it "Magical Cloak"" saying this she handed him the coat , to which Pesto couldn't reply as there was tears dripping down his eyes as he took the coat from her.Pesto had also dreamt to become a father when he married Anna , but after her sad dismissal , he was left all alone.

After church, Pesto wanders all over the place , enjoying the lights and feel of Christmas eve.The night gets piercing for him , but the warmth of festivity , and a glass of  free wine from the  church keeps Pesto's spirits higher .

After midnight , Pesto shivers his way to the shack where he sleeps every night. Its 2 o clock and the chills were getting severe  with time.He felt the urge to grab a bread delight , but it was impossible for him to get up and go in the search of it at this time of the night.Pesto had a cute thought and he said " Santa Are You Listening ......Please i have been so nice as well as lonely these years....do lend me a bread delight .....and please come and sit with me ....we both will have a meal together....." he smiled and then closed his eyes.

After a while , a drunkard was singing along and he rushed over to Pesto " will you dine with me mister ...its Christmas today ....i don't want to eat alone" .Pesto seemed surprised but invited the half wit and they both had a great time together. Pesto was enjoying this Christmas eve like never before , he took his final bite and said " Thanks Santa its all that i wanted .....go on and do fulfill some young wishes coming from every single house .....Thanks A Lot Again".

The next day .....Pesto was no more , after Anna he always waited for someone to come over and eat with him and his wish was fulfilled the night before Christmas.It was strange , he had died of intense cold along with his magical cloak.But the man who dined with him was no where to be found.

People say he was Santa himself , he had met Pesto while he was asking for a bread delight , he came up to him and sat with him thinking that Pesto will ask for some other needs that night.But to his utter surprise Pesto said " Thanks Santa its all that i wanted .....go on and do fulfill some young wishes coming from every single house .....Thanks A Lot Again".Hearing this a drop gushed out  from Santa's eyes and he left Pesto.

This New Year Don't Forget To Wish For Others !!!!
Email Post