The Story Of An Untold PARADISE at Kandarpur - The Rain

It rained throughout the evening as I and ajja( my mom's dad) , had been sitting on the couch  watching the drops kissing the heat soaked soil since the very beginning of it's advent.The iron door having curly designs opening to the wide spread garden adjacent to the cow shed with a square cemented patio right in the middle where occasions such as weddings, religious worships took place.But right now it's empty with some flower vases covering it's edges very specifically and all of it is taken care by the person sitting right next to me.We could hear the tapping noise of the rain on the patio and the echo of the singing bird (asian koel) humming along as the water comes down.It has been a really long summer... 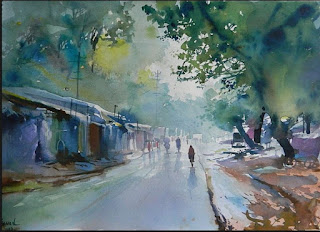 The pond as I referred in my previous piece( called pokhari in Odiya which is my mother tongue) wasn't visible through the door nor the window as it was right next to the other entrance door right next to the kitchen garden technically our backyard right after which  the endless farms started.

Through the window in the living room you can get a view of the not so concrete road going up to the highway.A kaccha rasta (not a concrete or cemented road) filled with uneven grass accompanied by a small swampy pond in between that used to have beautiful lotus flowers floating in it at anytime of the year.
As kids there is always official and unofficial places and then comes the secret hideouts where no one except we are allowed.There used to be a family living right next to that place in a small well made hut and there were kids as well , but again we kids were almost banned from interacting with them so never really knew who were they or their lifestyle.But the neighbors part I will cover in a separate piece than this one.

Retracing back to where I was earlier in my narration.The rain usually came down in the evenings which I kept taking successive whiffs through the window that had an amazingly addictive aura combined with the tea boiling in our kitchen stove.You had to just name the fried delicacies and someone either Bada Maeen ( my elder uncle's wife) , Sana Maeen( my younger uncle's wife) , Aaee(my mom's mother),  would be already out there preparing it for you or one of my uncle's specially Sana Mamu ( youngest brother of my mom) would be out with an umbrella to get what the kids have wished as the evening rain snack.As we ( me with cousins) ate and watched the rain through the open window as the sight gets more fascinating than any nature driven movie.

The endless pakodas popping into our over filled mouths, the distant chatter of my mom and her sisters from the adjacent room.My ajja reading the newspaper and I sitting on the table looking outside.The drops fall on the muddy road making the smell so fresh and subtle , a frog sitting right next to a puddle getting wet as if it's celebration, the leaves which had started to dry up from the miserable heat are laughing and talking to each other.There's always a song playing in the background in a very distant fashion when rains happen.Try to listen quietly the next time.The squirrels hate the rain and run and hide as quickly as possible.People are suddenly found rushing in the highway as if they are in hurry for some reason.Whenever it rains it's a psychological thing for people to start running , drive fast , as if there's a flood coming.The sky has gone darker soon the birds flutter their wet wings flying home but they don't seem to hurry at all.All this time there is no power at our place because the usual tendency is a power cut as soon as a thunder roars into the meadow and woosh there goes our electricity at Kandarpur.

Such were the rains at this pretty chaotic but charming place.The raw bundle of straw, getting drenched in rain will ruin the food for the cows in the shed and have to be dried or replaced is what my ajja is worried about with hands on his head but still can't ignore looking at the fun his grandkids are having and giving a wide spread smile ignoring the aftermath.

Among the other things he was worried about the safety of his family and pets after the rains as the place does get pretty wild after that.With venomous reptiles, bugs of all shapes and sizes, which start crawling in from their houses to ours as their houses get flooded from the rains.I used to freak out at the mention of such crawling members but both my aaee ( mom's mom) and ajja were very well acquainted to them.

There has been instances were right after the rain my ajja will venture out in the pitch dark pathway to check on his cows and calves on the cow shed and of course to take his smoke break ( it was highly offensive to smoke inside the house in front of kids especially) .He used to always respect that fact whereas we kids would always spy on him to get a glimpse of our grandfather smoking and puffs of smoke coming out of his room right which was located next to the cow shed.We had just 2 cows as I remember and she had given birth to a calf once when the whole process got supervised by ajja.

So someone would be chasing ajja in the dark rainy night with a torch to help him out , someone not me.I remember once he took his walking stick and started beating the heck out of quite a hefty snake despite of the fact that there was no way he can see it.But he could and he very well managed to kill it.The irony of life where  you are absolutely not scared of animals whatsoever whereas human beings are terrible to get along with.Well to be honest the people were also amazing back then.Not sure what happened.

After the rainy evening comes the dreadful night without power , where all kinds of stories were narrated by aaee to us.The stories of heroes, funny animals, mythological, and stories of God's and Goddesses.After which the house was sealed down to make sure none of the animals can seek shelter inside.The dinner was made , warm food was served in candle lights and eating got never missed out and was always eaten in batches like first the kids , then the dad's and the last being mom's who took a long time to wrap up.Meanwhile there would be ghost stories among ourselves (cousins) , trying to scare each other with supernatural facts which was no where in the vicinity of being true.Still the chills , sweating nights thinking about the window of the bedroom opening ajar with a stranger looking right towards you will be successful in making my sleep go away and I run to snuggle right next to aaee or my mom by midnight and keep hiding myself from encountering any such horrific elements.But till my last days spent there never actually found or experienced any of those horror stories.You miss the people when they leave and start seeing them once in a while because they are embedded deep in your minds , for me ghosts don't exist and never will there are guardian angels who are always out there looking out for you.

The rain has calm down and hopefully will get power back in a couple of days.I will be following up with the electricity office starting the next day if we have our phone back up.But phone's came much later.When we were kids there was no phone I remember my uncle going to the office in person or sending someone to get the power supply update.

The smell still remains while peeping through the window...looking at the drops splashing through the mud.The drops splashing into the pond when the rain would start , us running through the pavement and grabbing the last shot at the game where the shouts from inside would come to wrap up all of it and rush home.The rain making the farms blurry while looking from the terrace door which you run to close to avoid water from gushing in making the steps wet and greasy. The open veranda where hot pancakes are made in the coal stove has to be brought in and covered when rain starts pouring in.But everyone loves rain when it comes nobody complains , nobody sulks as that's when monsoon hits the farm lands making the farmers wish for a flourishing crop for the entire season.

As it rains...
You come over.
To play in the mud.
While you slip..
I pull you up.
Hand prints mud clad.
Paper boats..
How it floats.
With flowers in it..
Helping out ants that got stuck in the flood.

That's my childhood at Kandarpur.